A dramatic retelling by Greg Shafer

Then Yeshua and the disciples were in Capernaum. Peter was outside alone when a group of tax collectors came. “Peter,” they said, “Does that Rabbi of yours pay the temple tax like everybody else?”

Peter was afraid of the tax collectors, and couldn’t imagine the Christ doing anything wrong, so he spoke without knowledge.

“Yes, yes of course he does…” he answered.

He went inside the house, hoping that they would just go away.

But when he came inside, Yeshua spoke with him, “Answer me something, Peter. Do the Kings of the earth tax their own sons? Or just the other people?”

Peter was alarmed because he knew Christ knew about the tax collectors outside, but he didn’t know where Christ was going with this.

“From others only,” Peter replied.

“That’s right. Their sons are exempt,” said Yeshua. “Look Peter, we don’t have to do this. We don’t have to play this silly game of theirs. They demand from us dirt when God gives us gold. But so we don’t hurt their feelings, let’s play along. Go and catch a fish, inside will be a coin. That coin will pay your taxes and mine. Go head, it’ll be great.” 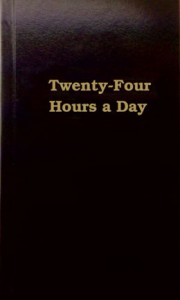 Privilege is our weakness. We suffer from mental conflicts from which we look for escape by drowning our problems in excess. We try through feelings of superiority to push away from the realities of life. But privilege does not feed, privilege does not build, it only borrows from the future and it ultimately destroys. We try to drown our feelings in order to escape life’s realities, little realizing or caring that in continued privileges we are only multiplying our problems. Have I got control over my unstable emotions?

This “Thought for the Day” from my grandfather’s little A.A. book was originally written about the weakness of alcohol. I hope the original content shines through in spite of my editing, as it has proven to be spiritual gold for folks all over the place. The next day’s entry (June 25th) goes on to say, “One of the most encouraging facts of life is that your weakness can become your greatest asset.” So true! If only we had this program and its resources for those of us who feel licked by an addiction to social advantages. Maybe it’s time to start one…

My name is Jason Winton. I live in the Mission District of San Francisco and work remotely in Butte County, California. This blog is a record of the things I want to remember about our family's steps toward living like Jesus (see our family newsletters).