My first attempt at putting together a workshop about Jesus was actually in Spanish during our last trip to Peru. Now that I’m back and have the summer off, I’m inspired again to give it a go–this time in English. 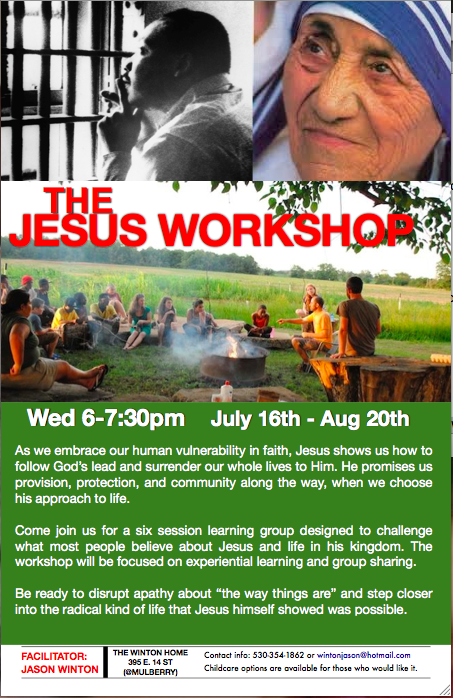 One 16 year-old youth I’ll call James came into the group home quickly and under special circumstances. He was on probation for small-scale crimes. He came to us addicted and seemed to be in primal survival mode most of the time.

James drew my attention that evening when he and two other male housemates were loudly playing music in the common area shortly before lights out. This was never a good sign for overnight staff and I began mentally preparing myself for a battle over who would turn down the music (him or me). But before I could say something, I heard angry words and raised voices from the living room. James had called another resident [insert a homophobic name]. Then, in response, the would-be target started yelling back, red-faced, almost crying, probably fearful of being bated into a fight. This other youth had a reputation for losing control. So I stepped in and tried to stop the bullying by dispersing the crowd, but no one moved. James continued to poke fun at him and ignored my warnings.

As I walked out of the room, feeling powerless, I heard James repeat his insult another time. My intention was to simply stand up for the bullied one, but I was afraid and tired of being intimidated too. So I blurted out over my shoulder, loud enough for James and the others to hear: “You’re [insert the same homophobic putdown]!”

James seemed shocked that I decided to play his game. Not surprisingly, he took it as an attack and quickly got over the surprise of me being the one who said it. Agitated, he paced back and forth, boasting to the others what he was going to do to me. “I’m gonna fuck him up!” I was smart enough to avoid any more contact with him that night and wished that the other residents would go to bed soon, perhaps making him want to let it go. He eventually did and the next morning I was off-shift.

Feeling conflicted about what I had said and how I handled the situation, I asked my counselor for help. He suggested a plan. I would return to the group home off-shift and ask James to talk with me. I would admit to him that I was wrong and tell him what bothered me in the first place. Then I would offer him a meal at any restaurant of his choice (my treat) to make amends for what I had done.

During our talk, he seemed genuinely moved by my confession. So the following week I picked him up for the meal and, surprisingly, I already felt him forgiving me and me forgiving him without doing much thinking about it. I emphasized that we could go anywhere he wanted, price would not be an issue. Strangely, he chose a local diner to share our meal. A decent place, but not exactly where I would have gone had someone offered me a freebie. His boyish excitement about all this and the modest restaurant he chose rather easily ripped apart my expectations and started creating a pain in my heart.

All of a sudden we had moved from being former enemies to friends. I’d say we both felt courageous at that point, though I’m not sure either one of us could have claimed that title as our own. We just had the need for strength, because being vulnerable and weak kind of sucks. Then a stunning curiosity surfaced between us that made it difficult to tell who had moved first or initiated this plan for our reconciliation. All I can say is that I’m grateful.

I’m not sure what happened to James after leaving the group home, but his response that day still amazes me. To think, we only had to give up our fear and unkindness to get a new start and a boost of courage!

*Note: this story was originally published in The Chico Viewspaper.

My name is Jason Winton. I live in the Mission District of San Francisco and work remotely in Butte County, California. This blog is a record of the things I want to remember about our family's steps toward living like Jesus (see our family newsletters).